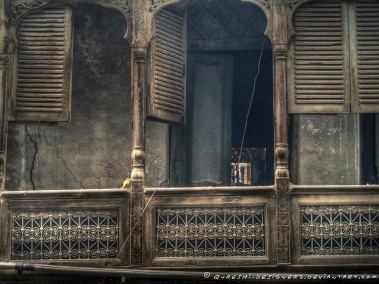 The sky was beautiful that day. It was orange- but with a tinge of rust announcing the arrival of inevitable autumn. It was the time of the year that compels most good people to think of themselves as romantics, especially in the evenings. Hassan was a romantic too however in a way only he could be. It wasn’t always possible but that particular evening you could see it in his eyes the way he looked at the sky. Oblivious of all that surrounded him. As if amidst the waiter’s shouting, unabashed laughter frequently rising from the table behind and calls of fruit-seller across the road did not exist in the world he lived in and the only thing that really mattered was the question whether that little chunk of fluttering cloud would finally give in to its freedom and become a part of that larger cloud which had monopolized the far edge of the horizon in the north or not? Perhaps what mattered even more to him was that how long will that little piece who had declared rebellion will remain true to its conviction? But of course, no one in that busy and somewhat claustrophobic cafeteria had acknowledged that. No one could be blamed for such ignorance too for his pale skin, neatly cut dark hair that curled, thin lips, high cheek bones and frameless spectacles not just concealed the sentiments he secretly carried but also managed to make his impression devilishly shrewd which was also not entirely false. Something about his demeanor and squared shoulders made him look like a person who means business and nothing more but fact is much credit for such an appearance went to those frameless spectacles he wore which made it very hard for people to look in his eyes. For better or worse Hassan was too proud to make a display of his romantic inclinations in presence of another being. Or maybe he was too shy. Like so many other things about him this too could not be said with certainty.

Everyone looked at Gaiti as if expecting something. Gaiti was a young woman who was still struggling to understand the part that she was now a woman. She was the careless sort or that’s what most people said about her. Her short hair on which she wore a hair band, her long and loose trousers and the dupatta hanging most casually around her neck gave her a somewhat childish look. However, right now she could not quite comprehend why everyone was so cheerful and expected her to be so. She had her reasons to be cheerful of course but that she had not yet disclosed to anyone at home. She had just arrived home from her aunt’s house which was in another city. Ever since her exams had finished she had been anxiously waiting for the results which was due a week ago. She could hardly sleep at night and would wake up quite early in the morning. She would spring to her feet and run to the gate with her loudly beating heart every time the bell rang. Sometimes it would be the milk-man and sometimes it would be the maid. The paper-boy was never punctual. Gaiti suspected that he did it intentionally to add flair of suspense in this already cruel situation. For the past one week in her aunt’s house she never let anyone open the gate when the bell rang in the morning. She could hardly keep her frustration when she would finally be sure that the paper-boy had come only to find it’s the woman from the next door who had come to complete her usual round of all the houses in the lane and naturally to spread and collect the routine gossips.

He sat long enough at the only table by the window that day. The letter he had finished reading hours ago still lay on the table, reminding him of the constraints that came in the way of all he stood for. He hailed from the northern rural Punjab and had after graduating from the very notable university given the exams of civil services. He had done well and was only waiting for the interviews now. He had rented a place with an old friend in Anarkali, Lahore and this cafeteria which was conveniently near and cheap was where he was often joined by his friends. This was the third letter from home this month asking him to come home. He had not replied to the last two. Few years ago his sister was married to a first cousin as was considered the only appropriate match. Hassan was called home to marry his cousin who was also his brother-in-law’s sister as this too was considered the only appropriate match. Later on, his and his sister’s children will be hurled to marry each other. This has been the norm in his family for so many generations that people had started taking pride in it and to defy it was throwing away family honor. Hassan wondered how many more generations will continue this practice till this will be certified as an act of incest.

The sky was clear that day and it was unusually hot for the autumn was just around the corner. Six days of agitation had completely worn her out. She was sure she had flunked Islamic Studies. She was always weak in that. Her brothers used to make quite a joke out of that but it was her mother’s disappointed looks she dreaded the most. She could barely come to think of the consequence if she fails Islamic Studies yet again and that the result too should come at her aunt’s place. Her aunt and uncle would say encouraging things but with every letter written to anywhere in the family the news will travel. She was a very bright student in other subjects. She was exceptionally good at history. Where others found it infinitely boring she was fascinated to read the tales of people who had literally conquered the world and reached the heights of earthly ambition but in the end left nothing more than the dust and ruins. It made her feel somehow superior to them all to be reading their stories and of their generations and knowing how it all ended for every one of them.

The matter at hand wasn’t that hard to handle for a person like him. That’s what he had thought initially at least. He wanted to change the world. Make something extraordinary of his very ordinary life. He thought of those heated debates in his student life and some even after that where he discussed politics and the flaws in the legal system and then again mainly politics. How he had always been so logical and so hard to beat. He had dreamt of changing the system not just because he was naïve and vain but also because he was much applauded for having a remarkable ability and intelligence to do just anything and Hassan had never hesitated in believing that. But to realize it all he needed time. He was just not ready for a marriage especially the one without love. Beneath his cold and austere exterior he was a passionate man. That evening he did not know who deserved to have more sympathy: he or his intended cousin. He would marry her after all and come back to the city alone and pursue his dreams. The dreams of a glorious career in bureaucracy. He had other dreams too. Of a wonderfully married life. Of life with a woman who would really understand him but the presence of those dreams he had never confessed to even himself before. He had stood for courage. He had stood for not giving in. He had believed in himself so much and now somehow that was beginning to change. He knew that there will be a child each year for the first five years of his marriage and that will be enough to keep his future wife busy and eventually everyone will forget the idea of love. With a resigned look he saw the sky and that little piece of cloud had finally merged in with the larger part and was now travelling with the rest of its kind to rain somewhere.

Gaiti had hardly entered her room when her mother came in. Her mother was radiant which for some reason startled her a bit. She sat her down and not able to keep to herself anymore gave her in a very content and satisfied manner the good news that she had been engaged to be married to her cousin Hassan and the marriage was due in few months. Gaiti didn’t even get a chance to tell her parents that her result had come out and she had topped in her university. All her plans to persuade her father who was more lenient to her than her mother, to let her get admission for masters in history now seemed futile. She couldn’t say if she was really sad but yes she was disheartened. For many minutes after her mother had left her to unpack, she instead sat on a window sill. It had begun to rain.